Sometimes we face a hardware issue with the router where we have to replace the faulty component of the Router. This is the procedure for FAN Replacement task. In this procedure we are considering Cisco 2811 Router for replacing fan. To start with we should prepare detailed action plan to avoid any extended downtime or outage during the activity.

As the Cisco 2811 router has three fans, two fans are system fans and one is power supply fan. To We have to first identify which one we have to replace.

If the devices is operational & in production use & since we will be powering off the device to replace the faulty fan in the router we should save the running- configuration & take configuration backup saved locally as well as a best practice.

Many times devices are deployed in Data Center & we have to work along with remote engineers with limited access, hence it is recommended to re-validate the serial number of the device whose fan replacement has to be done.

To avoid any confusion while reconnecting the LAN & WAN cables its advised to mark & do the labeling of the cables with respect to connected interface.

It is recommended to wear Static strap or band & to ground the chassis to prevent any damage to the device from electrostatic discharge.

Step 1. Turn off the Power of the Router.
Step 2. If the Router is mounted in Rack then first we have to unmount the router from rack.
Step 3. Now rack mounting brackets which are installed on the sides of Router has to be removed using screw driver.
Step 4. Now to remove the Chassis cover follow below step using flat screwdriver with a blade width 5-7 mm
Step 4a. Now insert the blade of the 1/4-inch screwdriver straight into the square hole on either side of the chassis near the back, so that it fits against the chassis and does not go past the chassis and into the narrow slot.[ as per below figure]

Step 4b.With the screwdriver positioned as required in Step 4a. above, rotate the screwdriver a quarter turn toward the back of the chassis to loosen one side of the cover. [ as per below figure]

Step 4c. Now follow the step 4a & 4b for the opposite side of chassis as well.

Step 5. Slide the cover toward the back of the chassis until it contacts a stop ( Approx.. 1 inch) The front edge of the cover will become free. 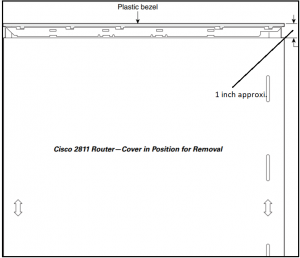 Identification of Router Fan for replacement

Since the procedure will be little bit different for system fan & power supply fan we will follow required procedure accordingly which has been defined separately. Identify the faulty Fan which has to be replaced as per shown in below figure. 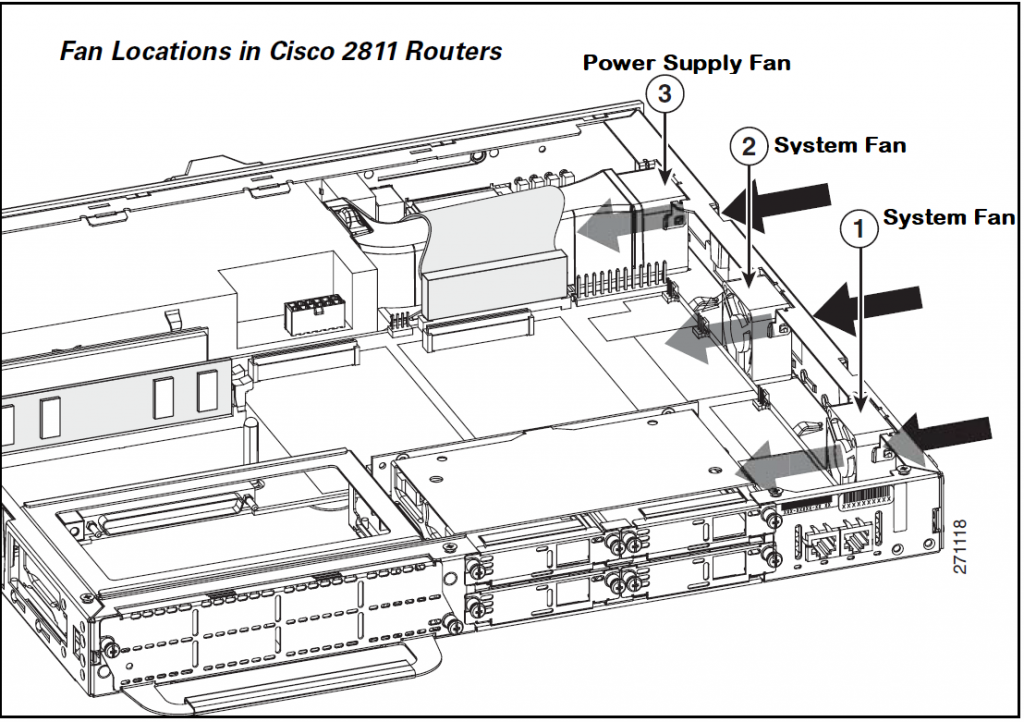 Step 1. Disconnect the FAN connector from the Router Board as per below figure.

Step 2. Fan’s wire would have been wrapped /managed using wire-clip, remove from there carefully.

Step 3. Now Fan can be removed by lifting the fan up & then tilting it towards the Chassis wall as per below figure. 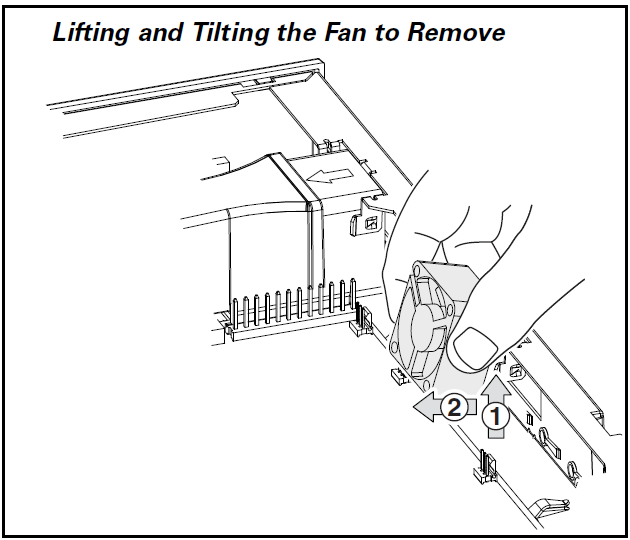 Step 4. Fan should be kept in anti-static bag to protect from Electrostatic Discharge (ECS)

Step 1. Disconnect the FAN connector from the system board.
Step 2. Lift the Ribbon cable to allow the air baffle which directs the airflow as pre below figure 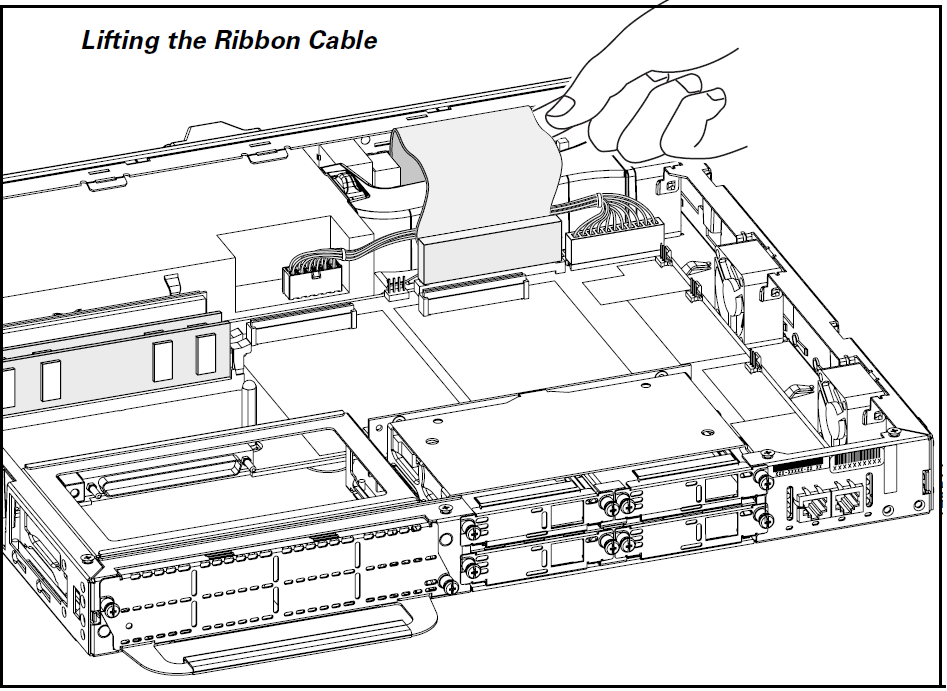 Step 3. It is not necessary to disconnect the Ribbon cable from Router system board.
Step 4. Now remove the air baffle by gently squeezing  from the sides and disengaging the baffle from the chassis. 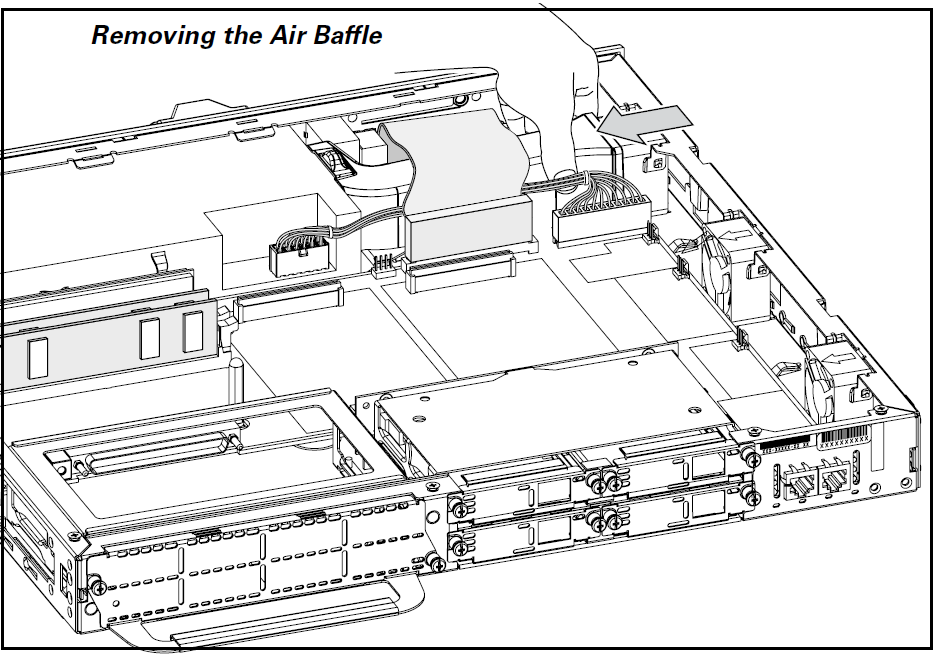 Step 5. Remove the fan wire from wire management clip,
Step 6. Remove the FAN by placing a flat screw driver at the base of the FAN & lift it towards up slightly. 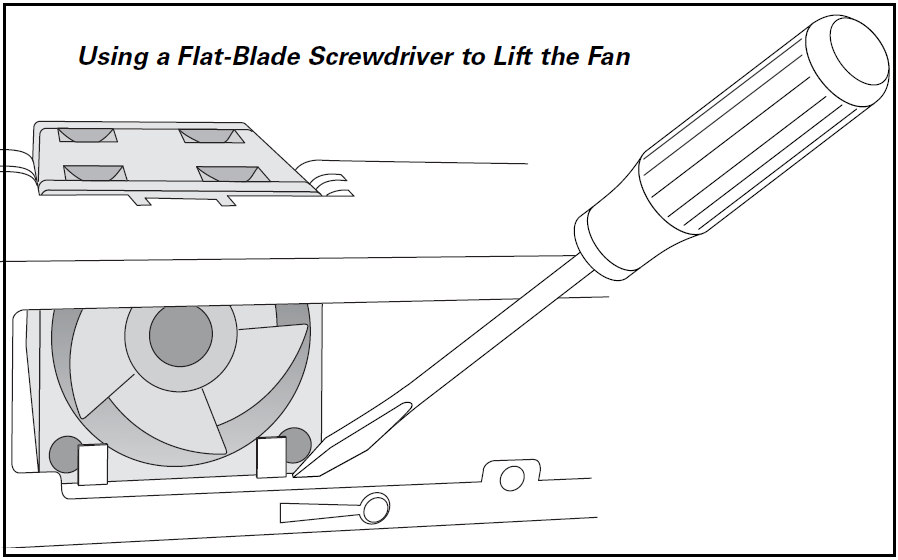 Step 7. Disengage the fan from the side attachment slot and push the fan towards the center of the chassis and remove the fan.

Process for installing the Fan in Cisco 2811 Router

Step 4 Now side the fan down over the locking tab at the chassis
Step 5. Angle the fan into the locking tabs, and verify that the fan has placed into locking tabs.
Step 6. Now manage the wire using wire management feature in chassis.
Step 7. Now connect the fan wire connector to the system board.
Step 8. Install the plastic air baffle below the ribbon cable and screw the plastic tabs on chassis base. [ applicable only for power supply fan]
Step 9. Now fold the ribbon cable below the sheet metal flange to prevent any damage to cable while installing the cover. [applicable for only power supply fan]
Step 10. Ensure that power cable and ribbon cable have remained secure to the Flash & router system board.
Step 11. Position the cover so that it rests flat on the chassis, with the front end of the cover about 1 inch from the front end of the chassis.
Step 12. Now slide the cover towards the front so that male flanges enters the slots & cover it fully. You may need to press the cover against the chassis while sliding.
Step 13. Now use screwdriver to install the four screws at the top back of the cover.