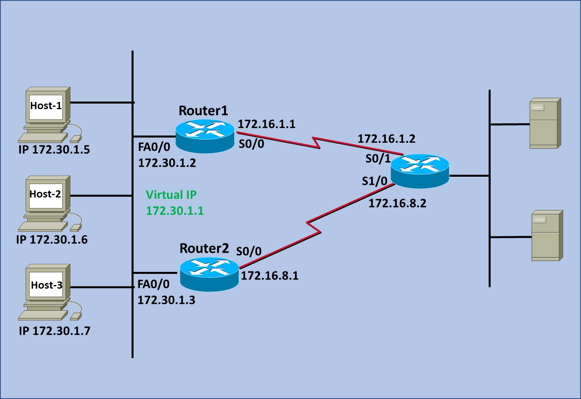 This process of active router election & routing responsibility from one router to another router is transparent to the end user. HSRP is actively being used in network infrastructures where high availability is required.

Though name says Hot Standby Router Protocol, but this can be configured in Layer-3 Switches also as they preformed routing as well.

This feature allow us to monitor & track other interface on the router to modify the HSRP Priority of respective HSRP Group. Example Lets take case of Router-1, If serial 0/0 goes down, then the Priority value of Router-1 will get decreased by 10 and will become from 105 to 95. [ Default decrement value is 10 however we can modify as well]. Now as the Router-1 Priority Value become 95 and Router-2 Priority value is 100 [ default value] so Router-2 will takeover the role of Active Router.

Note : In one HSRP Group there can be only 2 routers but one router can be part of two different groups which can help us in achieving load sharing between both routers. There are further advance configuration also such as authentication, Preempt delay, multiple groups, etc. which we will cover separately.

Q: What is the full form of HSRP?

A: HSRP is device redundancy protocol, however in case of link goes down by using ip tracking we can achieve link redundancy.

Q: Can we use HSRP for load-balancing also ?

A: No HSRP can’t be configured for load-balancing, however we can achieve load-sharing by configuring multiple groups & assigning different priority based on the group.

A: HSRP is LAN redundancy protocol where is it configured for Gateway redundancy.

Q: Can we configure HSRP in cisco & VRRP in non-Cisco device ?

Q: Can we configure HSRP or VRRP in Switches also ?

Q: What is the purpose of Hot Standby Routing Protocol ?

A: The mail purpose of Hot Standby Routing Protocol is to provide Local Gateway Redundancy & seamless switchover to other redundant device in case hardware or link failure.

Q: What is the name of the Cisco initial proprietary first hop redundancy protocol?

A: HSRP or Hot Standby Router Protocol was the initial Cisco proprietary first hop redundancy protocol introduced & Version 1 of HSRP was described in RFC 2281 in Year 1998

Q: Can we configure HSRP between two different models of Routers ?

A: Yes it can be configured between two different models of the Routers but as its is Cisco propriety both the router should be Cisco & their IOS should support HSRP